Story/Photos by John Vonderlin
Email John ([email protected])
Holes in Pescadero, Part 3
Hi June,
I would like to think my telling this next story will not pose a danger to me. That is perhaps, a silly consideration, given the usual subject of my postings about the adventures on the Coastside I experience. Yet, I have this feeling of foreboding, not based on knowledge or fact, but something deeper, more hardwired, perhaps instinctual, about speaking of what I think I may have experienced. Ohh. I’m sorry. I’m speaking in clouds darkened by fear. Let me tell you the story as it happened and you can decide.

It was late in the afternoon, and I was nearing the turnback point of a long, tiring hike along an isolated, rarely frequented part of our coast. Thinking about the cold one waiting in a cooler in my car, I decided to take an unfamiliar shortcut through a beach-side canyon I was unfamiliar with. But one that would obviate the need to return all the way down the beach on the route I had come.

Unfortunately, the faint path I chose quickly faded away, leaving me picking my way uphill through thin spots in the more than head-high thicket of coastal shrub, which was heavily-laced with poison oak. I considered turning back, but the thought of that soon-to-be-had “icy cold” slipping from my imagination’s hands, pulled me forward.

Then I heard it, or more accurately, sensed “it.”

It pierced my awareness like a high-pitched keening wail, yet I could feel it washing over my whole body as if I was standing in front of a “Wall of Sound,” a bank of invisible speakers for a bass guitar.  It was  omnidirectional, with  the sound being here, there, then everywhere, yet nowhere. Looking down, I could see my armhairs were standing at attention, in goosebump alert, as if they needed to aid my inner ear’s tiny hairs in divining the source of this unprecedented, very disturbing sound. A sound that seemed to grow in strength and demand as I concentrated on its source.

While doing so, I felt myself turning, and my feet began shuffling forward. While my brain was unsure of the sound’s directionality, my feet seemed not to be.  Slowly at first, then more confidentaly, as if my ten toes had gained purpose, having set their course, they moved me forward. Setting me on a course, I was instantly aware that there would be no detour, no turning back, when, suddenly a huge patch of poison oak rose up defiantly in front of me. By grasping and clawing anything that wasn’t going to give me the dreaded itchy red rash, I pulled myself through the toxic leaves into the next clearing. The sound now seemed so loud, so omnipresent; I could hardly think, yet I could easily hear the poison oak’s fragile branches and twigs cracking and breaking as I elbowed my way through them. Once again a big poison oak bush blocked my way, but I quickly conquered it with a well practiced kamikaze move.

I was on a mission: I had to know where the sound was coming from. I had to find out what it wanted.

Things get a little hazy after that. I vaguely remember that, at some point, my battle to move forward was thwarted. I struggled mightily, if mindlessly, but it seemed like I was stuck in a powerful hold. Meanwhile the sound swelled to a demanding shriek, as did my need to heed it. I thrashed about in this painful state of imprisonment and frustration for several long minutes, then a grayness descended over me.

I blacked out and lost total awareness.

When I woke up, I was lying face down in the bushes. I was  dazed, confused and my head hurt. I was suffering from a splitting, two-sided headache. When I tried to stand up, I realized my leg was painfully trapped in some way. Looking down, I was surprised to see my leg securely entangled in loops of a strand of treacherous barb wire, still fastened to an old post nearby. I gingerly, oh so carefully, tugged one of its sharp barbs from the seam of the pantleg of my jeans, slipped its meancing loops over my shoe, groaning as it tore across the lacerated flesh of my ankle.Then I sat up. It was then, through the bushes just before me, that I noticed a metal structure in a small clearing.  I carefully got to my feet, feeling wobbly and favoring my tenderized leg, whose muscles felt as offended as its serrated skin and gouged flesh did.

Pushing my way into the clearing, I approached the structure, a large, round metal cage, its bars sturdy pipes set in concrete, surrounding a dark, circular, corrugated-sided hole, descending into the ground. On one side of the circle of metal pipes there was a sturdy, swinging metal gate, suitably-sized for a man to pass through. But it had a large, unfamiliar type of lock holding it closed, from the inside. How odd I thought.

I moved my head into the tight space between the bars as far as it would go, peering into the darkness below as best I could. I could see a metal ladder, attached to the hole’s side, dropping into the darkness. But I couldn’t tell how deep the hole was. It was inky black down there, and my view was further obscured by a small tree growing from a crack in the side of the tunnel, about ten feet down. As I continued to try to see what was down there, I was distracted– or, perhaps, it was my imagination– because I heard the rhythmic sound of a large, slow-moving machine working somewhere far below. A growing breeze, puffing across the opening, rustled the tree’s leaves and my sense of the disconcerting sound was gone.

How very odd, I thought again.

That’s when recent memories of that same machine-like sound, the one that had drawn me, here, to this odd structure flooded into my present awareness. I was scared. What happened to me? I turned from the hole and quickly looked around, expecting danger. Seeing none, I began surveying my surroundings more methodically. That’s when I noticed them, lines of  three-toed, cloven-hoofed tracks, leading across the soft, sandy soil of the clearing to the locked gate in the cage. My panic swelled. Wide-eyed, I pivoted jerkily, trying to see everywhere around me at once. Then I fled. I won’t say mindlessly. But I will admit, that with more forethought, I could have run around some of the poison oak patches I bulldozed through.

A few minutes of intense heart-pounding retreat, with seat-of-the-pants route-choosing, complicated by continual over-the-shoulder gazing as I plowed my way through the thicket and I reached the road, where, at one point I could finally see my car. I soon got my cold one, but the strain of my escape left my hand shaking so hard that I caused it to foam over the top vigorously,  before I  downed it in a few short, nerve-settling glugs.

Since then I’d thought a lot about what happened to me that day without coming to a rational explanation. I tried to explain them away as a synergism amongst the fatigue, dehydration, and highly unusual headache I suffered that day. But that explanation left me unsettled.

Some weeks later I tried to find the structure again. Perhaps, my confusion during the event (as I now call it) hindered my search efforts or possibly the fact I had just recovered from the worst case of dermatitis I’d ever had in my life, and wasn’t that eager to try to top it, was an obstacle, but for whatever reason, I was unsuccessful.

It remained a troublesome mystery and visited my thoughts irritatingly often, until one night while channel-surfing, the answer slapped me in the face. I was watching a chunk of the original movie based on H.G. Wells book, “The Time Machine,” and I heard the exact same noise that had summoned me to the structure. It was the Morlocks’ siren, used to summon the Eloi to willingly, or at least passively, enter the “wells” into their underground world for slaughter, whenever their larders were depleted. The realization punched me in the stomach, as it shriveled my untested fortitude. Only the luck of entanglement in barb wire had kept me from being Bar-BQ.

I can imagine the groans coming from those of you who have kept an open mind thus far as they slowly formed their opinion about my veracity in relating my tale of this bizarre episode. I understand, being a lifelong skeptic. In fact, I’d join you in your sad surmisal, despite its reflection on my character, perhaps even my sanity, if it wasn’t for the fact, that I, in the best tradition of war correspondents taking fire, somehow in my dazed, then frightened state, had kept on clicking away with my camera. Here are just a few photos of this experience I’d like to share. I’d share the rest, but I’m thinking “The BigFoot Museum” might want to open a “Morlock” wing and I’m hoping to sign an exclusive agreement. I just hope Morlocks don’t have Internet and read this, because I’d have to change my name to  Entree. Enjoy. John

Wikipedia Morlocks entry:
Morlocks are a fictional species created by H. G. Wells for his 1895 novel, The Time Machine. They dwell underground in the English countryside of A.D. 802,701 in a troglodyte civilization, maintaining ancient machines that they may or may not remember how to build. Their only access to the surface world is through a series of well structures that dot the countryside of future England.
Morlocks are humanoid creatures, said to have descended from humans, but by the 8,028th century have evolved into a completely different species, said to be better suited to their subterranean habitat. They are described as “almost antlike“, because they slink about silently during the night to catch their prey.
Morlocks wear no clothing but are covered with fur. As a result of living underground, they have little or no melanin to protect their skin, and so have become extremely sensitive to light.
The Morlocks’ main source of food is the Eloi, another race descended from humans that lives above ground. The Morlocks treat the Eloi as cattle, and the Eloi do not resist being captured. 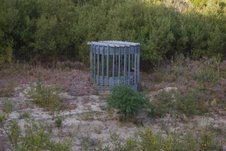 This entry was posted in John Vonderlin and tagged HG Wells. Bookmark the permalink.