Who was Loma Mar’s ‘Johnny Appleseed?'”

Before going to see the Big Waves, Meg and I went on a “photo mushroom hunt” in nearby Memorial  Park. There is an old apple orchard bordering Wurr Rd. that the rangers mow, but do nothing else for the incredibly old trees that remain. When it was planted, and by whom, I don’t know. As we were poking around at its edges, I decided to shoot a picture of this ancient apple tree. 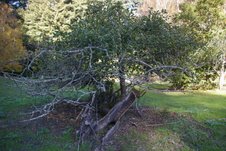 If you look carefully you can see the original trunk is leaning over heavily and has decayed to a half-pipe-looking trough. 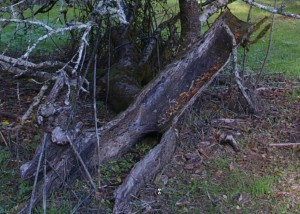 As I was shooting photos of it, we talked about the amazing struggle this tree had put up to stay alive. Apparently, after the main trunk had rotted, the tree had fallen over. A lower branch apparently then rooted, and with the help of the still living cambium layer and roots of the half pipe of trunk remaining, was able to nourish a few upper branches. One of which became the main trunk, standing straight and tall. It was fortitude incarnate..

As we walked away, Meg said she saw an apple in the tree. I was surprised, having seen none, but looked where she was pointing and sure enough, a beautiful golden apple hung there just above my head. The last 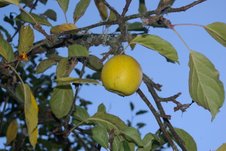 of its kind surely, hanging on as resolutely as its parent had hung on to life; it beckoned me. I walked over, reached up and plucked it. Rotating it in my hand I saw it was perfect. Golden, firm, no sign of an insect’s assault scarred its protective skin. I wiped it clean, then holding it up and twirling it to reveal its perfection, I joked, “Eve, would you care for the first bite?”

When it was my turn, I was amazed by both its texture and taste. It was the best apple I’ve had this year. It’s ripening on the tree had produced a richness of taste impossible to find in store bought apples because of the need to breed them and pick them with long term storage and transportation in mind. Impossible even to find at U-Pick orchards, because this late in the season all the picking ladders have been put away and the roadside stand is closed. 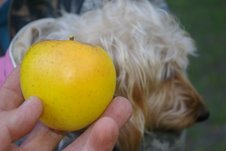 Having had a family apple orchard in Sebastopol for years I know it is only these late season, tree-ripened until ready to drop by themselves apples, that can taste like this. And then only from the old varieties whose DNA hasn’t been buffeted and transformed by market forces.

The incredibly tenacious lifeforce of the tree, the exquisite taste of the very last fruit that remained, a fruit that somehow had avoided falling to the ground, or being attacked by insects for so long, seemingly waiting for us to come, suggested a course of action. It had recruited me. More on this in the Spring when my long dormant Johnny Appleseed credentials are renewed or when I’ve found out something about this orchard’s history. Enjoy. John