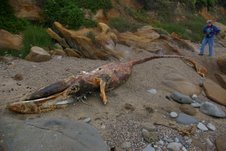 My weekly visit to Invisible Beach, was somewhat disheartening. Though any R & R from the pressure cooker demands of caregiving to the extremely vulnerable is welcomed, the continued inactivity at Neptune’s Vomitorium isn’t. The sand is actually higher then ever, completely blocking its throat, apparently preventing Neptune from presenting us with a technicolor yawn of non-buoyant debris. 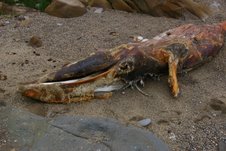 Returning to the car we drove south and stopped a few hundred yards north of Pebble Beach, just south of Pescadero Point. I often see school buses stopped there, with hordes of kids experiencing the beach and the reef below the cliffs. It’s a fair sea glass hunting spot, and after seeing no interesting flotsam on the beach, we started doing just that. That pursuit tired quickly, even though I found two blue pieces of glass, relative rarities. We decided to hike over the rocks, around a point, to Pebble Beach. As we approached them, I saw the Sea Serpent hidden behind a large boulder. It was huge. And dead. At least thirty feet long, with a head that seemed to be all mouth 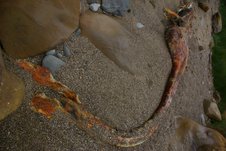 A huge mouth, though it was more like a Pterodactyl’s beak, that could easily have swallowed a man. This creature, this thing, looked like nothing I’d ever seen washed up on any beach in the world. It creeped me out. Were those nuts running the Cryptozoology websites for Big Foot, Nessie, and the Bog Monster actually visionaries, revealing the truth to those willing to listen? Probably not, but there are mysteries unsolved about the abyssal depths of the ocean. 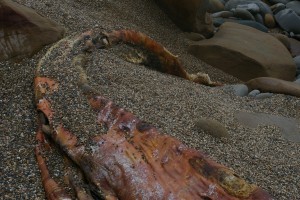 Having called the Marine Mammal Society and Ray Bandar, we should know whithin a few days whether or not this is a Sea Serpent or just a Sea Monster. I have a theory involving dragons, still surviving on an unknown island, but for now, I’m sticking with the conventional story: SEA SERPENT ASHORE AT PESCADERO POINT!
And unlike all the gentlemen in the following story, or the CryptoZoology website creators, I’ve got clear pictures that prove it. Enjoy. John 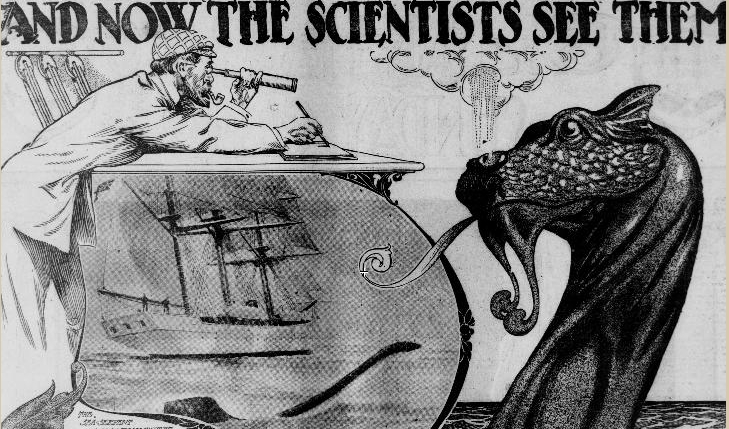 VERILY, the perversity of mankind passeth all under-
tandlng! And if there be any of you who would challenge
the justice of this aphorism, first let him reflect for a
moment on the fact, that we talk of the phoenix as if it
were real and of the sea serpent as though it were a
purely mythical beast! But the sea serpent is probably
himself to blame for this, inasmuch as he is indiscrete
enough to show himself from time to time to those who
go down to the sea in ships. Hence, as with other
distinguished mortals, everybody who has occasion to
cross the ocean burns for an opportunity to boast to an
acquaintance with this distinguished dweller in the deeps.
A vast amount, has been written about the sea serpent,
but at all the stories that have been told it is sad to reflect
that those of the clergymen surpass in wildness of elab-
oration even the yarns invented with intent to deceive. At
least, so says Frank Bullen—and he ought to know, .
One or two, of the more serious accounts are worth
repeating. No longer ago than 1891 one Peter Nelson, a
quartermaster, and therefore “an honorable man,” saw
from the deck of the Rotomahana, a beast with the head of
an eel and fins ten feet long rise thirty feet out of the water.
It was dark above and white below. He gave a long account
of this strange beast, yet, so far, those. whom he intended
to convert only reply that: It was “Very, likey a whale”— in
short, that he saw nothing more than a whale ”breaching.”
Captain McQuhae of H. M. S. Daedalus and his officers in
1848 created a great sensation in England by a sea serpent
story which at the time was discredited by the late Professor
Sir Richard Owen. But, time brings its revenges, for it may
turn out that the professor was wrong. Briefly, they reported
having seen an enormous serpent with its head and shoulders
some four feet out of the water and some sixty feet of its body
on the surface:
It passed rapidly so close to the ship that a man’s features
at the same distance, could easily have been distinguished. It
had no fins, but something like seaweed washed about its
back.
Now, within the last few days, the honor of he and his
officers, or rather, their credit as observers, has been vindicat-
ed, for at the last meeting of the Zoological Society of London,
E. B. Meade Waldo and M. J. Nicoll described a creature
seen by them from the deck of the Earl of Crawford’s yacht
^The Valhalla,’ which bears a remarkable resemblance to that
seen from the Daedalus. These two men accompanled
Lord Crawford as naturalists, during his usual winter cruise.
Both are well known naturalists, and one is a member of the
Council at the Zoological Society. The story they unfolded to
a breathlessly excited assembly of the fellows is briefly this:
When off Para on December 7, 1905, at 10 a. m. they were
standing on the deck of the yacht when their attention was
caught by a curious sail-like object of about four feet long and
two feet high waving from side to side in the water. No sooner
had they turned their glasses on this strange object than
there appeared a huge eel-like neck, some six feat long and
as thick as a man’s thigh, and this neck was surmounted, by
a great turtle-Iike head with large eyes, now borne high, above
the sea, which was quite calm. It was dark colored above
and silvery white below. After a few moments, the head and
neck were slowly lowered, and when level with the water were
violently lashed from side to side, churning up the sea into a
great sheet of foam, and then it vanished.
This is noteworthy, because when Mr. Nicoll came on deck
after breakfast,one of the officers came up and reported that
during the night he saw a strange commotion in the water. At
first he thought it was a rock “awash,” but a more careful
examination showed that it was a beast of some kind,
traveling faster than the ship, which was then making only
about eight and a half knots. The officer “hailed the deck” and
the lookout man, and thus got witnesses to this weird
phenomenon.
Seriously, we can no longer regard the “sea serpent” as a
myth. There can be no question that the ocean harbors some
secret, which we have not yet penetrated. It seems unlikely
that this evasive creature should be a descendant of the old
Plesiosaurs which became extinct millions of years ago,
though the resemblance to those monsters is striking. More
probably it will prove to be some bizarre form of reptile. But
the resemblance between the descriptions given by these
gentlemen and. that given by the officers of the Daedalus
agrees too closely to the passed by, and, furthermore, both
agree with the description of a similar creature seen off
Tonquin some four years since. It is possible that it may
even prove to be a “serpent.” For it is well known that the
land snakes once possessed limbs, and some gigantic
forms of sea snakes may well have preserved their limbs,
though now transformed into paddles, like those of the
turtle and whale. 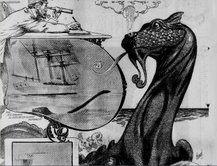