I found the source for the alternate version of the origin of the name of Gazos Canyon. My previous understanding was based on the Gazos Canyon guided tour we went on. During which, a rhetorical question about the canyon’s name’s origin got a chorus of “herons” from some of the hike’s participants. It was said that gazos was the Spanish word for “herons.” While my Spanish vocabulary is pretty good, the section for types of birds doesn’t go too far beyond pollo and pavo, and of course paloma, the bird which was, I read somewhere,  possibly the source of Pigeon Point’s name, not the shipwreck of the Carrier Pigeon. So, I accepted it as fact, and posted it in my story.

Well, I found the source of the alternate theory again, and it’s Tess Black’s book, “Portraits of Pescadero.” In the “Steele Family Section,” on Page 145, she’s discussing Rensselaer Steele Sr. in 1879, and has this sentence: “”The property included “a narrow, spring-fed ravine” that ran along the coast about a half-mile south of where the Gazos Creek (named for the Clove Pink or Sea Gilly flower, that grew in the area) flows into the ocean.””
This became the Gazos Ranch, that Harvey Mowry, documents so well in his book,”Echoes From Gazos Creek Country,” I’d tell you what he might have to say about this, but his book starts in 1862, and doesn’t seem to mention it.
Well, I looked up Clove Pink and Sea Gilly and here’s a little Wikipedia info that turned up a strange connection, that might or might not be related.

(Clove Pink) is a species of Dianthus. It is probably native to the Mediterranean region but its exact range is unknown due to extensive cultivation for the last 2,000 years. It is the wild ancestor of the garden Carnation
It is a herbaceous perennial plant growing to 80 cm tall. The leaves are glaucous greyish green to blue-green, slender, up to 15 cm long. The flowers are produced singly or up to five together in a cyme; they are 3–5 cm diameter, and sweetly scented; the original natural flower colour is bright pinkish-purple.
The name Dianthus is from the Greek words dios (“god”) and anthos (“flower”), and was cited by the Greek botanist Theophrastus.
The colour pink may be named after the flower. The origin of the flower name ‘pink’ may come from the frilled edge of the flowers: the verb “pink” dates from the 14th century and means “to decorate with a perforated or punched pattern” (maybe from German “pinken” = to peck). Source: Collins Dictionary. The verb sense is also used in the name of pinking shears

The Sea Gilly connection was problematic for me. Though there was only one far-northern, species of Dianthus native to this continent, it;s possible there are look-a-likes, or that its worldwide cultivation suggests an early introduction by settlers to the coastside and its possible thriving, upon escape. But, I’m not sure of the connection between “Gilly” and “Gazos,” as there is none mentioned.
The trouble with the Spanish-heron version is that “garza” not “gazo,” is the Spanish word, at least these days, for “Heron.” Admittedly “Las Garzas,” is difficult enough to pronouce that a change might be likely through the years. But, what happened to the “Los,” as in Los Gazos Creek, and how did it become a masculino noun, changing its gender from “una garza”?
Here’s a third theory. White House Canyon, the one just south of Gazos Creek Canyon, got it’s name from the two story, white-painted house Isaac Graham built on a flat above the little creek, in the 1850’s. In Harvey’s book, he says, Isaac (Steele) recalled hearing how Graham’s house, sitting isolated and painted white, had been a landmark for early (1850’s) northbound ships. And that might be relevant because the only language I could find that gazos means anything is Portuguese, where it means albinos.
A fourth theory, which is similar, would be that the nearby white cliffs, or chalk ridges as they were known then, which had been mentioned as early as Portola’s expedition, and were clearly visible from passing ships, might be the “albinos” instead.
The odd coincidence I was reminded of, was that President William’s McKinley’s family, and President Herbert Hoover’s family, had strong connections to this essentially empty, isolated-to-this-day remote area.
Here’s another odd fact I found in the Wikipedia Dianthus article:that might be connected. Could young William’s’s love of carnations been initiated by time spent on the Gazos Creek where his brother James had a sawmill?

Enjoy. John
P.S. By the way there’s a picture of an apple box label from Chalk Ridge Orchards, Torquay, California, Grown and Packed by I.C. Steele, in Tess’s book. It’s on Page 158. 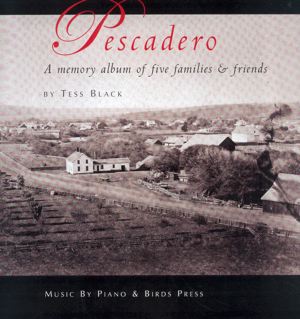