Willowside Farm: Where Dogs are the BEST & you can stay overnight in the most rustic, original place on the South Coast!!!!

[Image below: Meet Hillary, one of the resident guard dogs.] 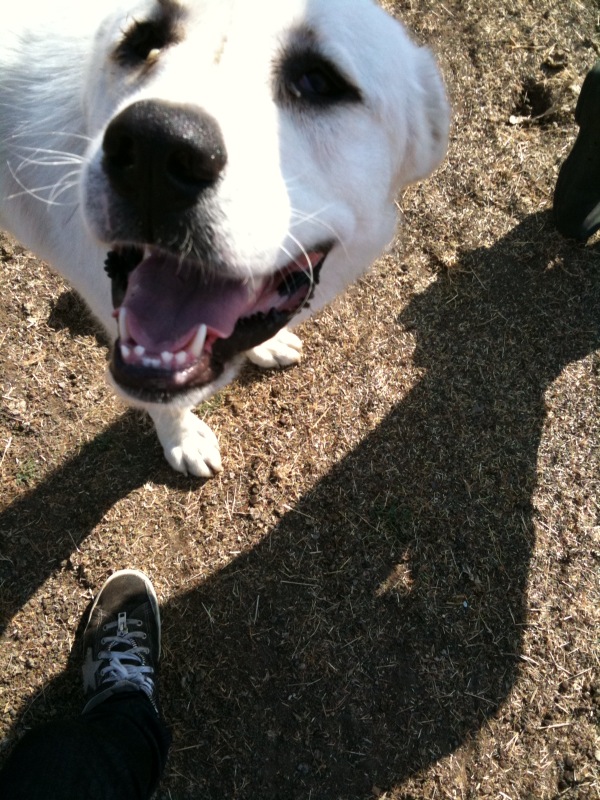 I took my cousin, Gabriele, with me, and we had a fabulous tour of historic Willowside Farm, and I cannot rave enough about it! We were invited to a geese, duck and sheep-herding (national championship) event 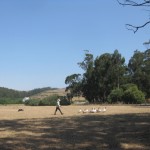 oh, so calming, so relaxing. The participants, mostly ladies, were just perfect hosts. I cannot remember when I had a more relaxing time.

You should know that Wilowside is an historic dairy, originally owned in the 1860s (something like that, or earlier, even—and certainly, the land could have been occupied by adventurous settlers  before the Gold Rush in 1849) by Pescadero’s pioneer Alexander Moore family. In brief, there were a series of owners but the bottom line is: Willowside was built, and demonstrates today, that it was constructed as a “big time” dairy and showplace. The buildings on the property, and there are many, have been brought up to code comply with the current, rigorous standards of the County of San Mateo. There’s no choice about that kind of thing—I saw earthquake standards put in place in old structures— I recognized them because I have them in my own home.

Willowside Farm manager Michael Head, a former Marine, impressed me so much. He has been working on resurrecting the farm’s original dignity for a dozen years—this is a man who is the best. My cousin and I could not believe that he had accomplished what he had. Fixing up the property was an immense project, more than any of us “mere mortals” could ever tackle. What a man!

And, now, one of the big long barns 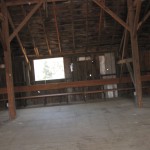 will be used for events and weddings, with the nupitals performed at a nearby lake, so dreamy lake 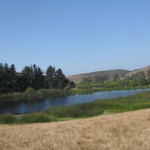 you will never want to leave.

Right now there are rustic accommodations  (the former quarters for the cowboys, including circa 1950s handwritten “graffiti” on the bathroom door!) for overnight guests: I may not be accurate on the cost, but i think Michael said something like $60 bucks a night for a room in a place that has no equal on the Coastside. I mean, if you want ruggedness, if you want to experience the way it was, try one of the guest rooms. Very authentic.

I understand that, in the near future, “Outstanding in its Field” is doing a wedding at the dairy. Wow. I look forward to hearing about one of their lunches or dinners there.

I know, I know. The South Coast. The last frontier on the Coastisde—but this is worth it. The owner, and the managers, Michael Head and his wife, Julie Sittig have taken, perhaps one of the most special properties on the South Coast, and turned it into a treasure that will soon be known all over the world.

(In fact, Michael told me that someone took a photo of the main blue and white trimmed house, and was selling it as a postcard of an authentic old place to stay overnight in France.)

Michael pointed out a “Dawn” redwood 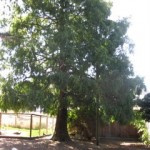 which is fringy-ier than the usual redwoods we are accustomed to seeing here on the Coastside. In the 1970s the “Dawn” redwood caused excitement when the same tree was found growing in China.

Willowside Farm has used a flock of cats as enforcers to move out the rats and other undesirable critters. And there are peacocks everywhere;  the males display the full spectrum of color 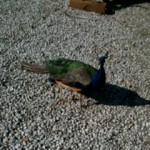 while nature has protected the females with a neutral look so as they protect their young on the ground. When we were visiting, we saw baby peacocks trailing behind the mom, the color of “invisible.”

I applaud you: Willowide Farms.

(This was written off the cuff; I was excited by what I saw. Sad to hear that  “sticky fingers” took so much from the old Willowside, authentic relics, irreplaceable,  but so much history remains for all to enjoy along Stage Road…….) 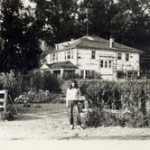 [Image above, circa 1980. Me standing in front of Willowside Farms, photo by Suzanne Meek.]

[[Note: Local  artist/photographer Susan Friedman produced a documentary on Alice Mattei  before she died and the property was sold. The doc gave an accurate picture of how the dairy worked, the work ethic of the Matteis, and how everyone in Pescadero attended the parties there.] Also, above photo of Hillary, a “guard dog”, was shot with the new iPhone. It’s amazing what the new iPhone photo can do close-up. Not bad, huh?” Oh, and that’s my shoe in the picture!]

There will be hotdogs, hamburgers, vegiburgers & sodas.

Bring your friends, but LEAVE YOUR PETS AT HOME.

This entry was posted in Michael Head, Willowside Dairy. Bookmark the permalink.